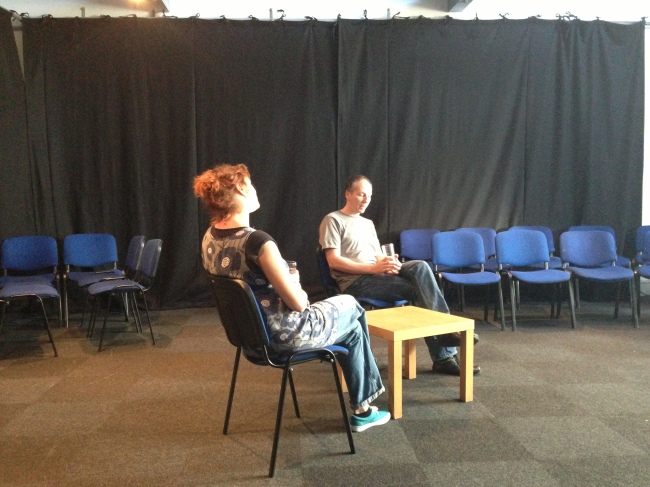 The countdown to performance commences  as we begin the final rehearsal phase. The cast have learnt their lines – and other characters’ lines too, as they will be swapping.

Scene one: Ensure scene begins with someone placing beer mats and projections reads: ‘a pub’

End of scene: Jerry’s intention is to leave. Freezes on exit. Emma’s is to stay and ponder for a while, puts glass down on table which is cue to SM and stage team. SM and team change scene around them. Jerry’s chair moves to SL with table next to it with typewriter. Emma moves when table has moved into place SL and exits through audience. Robert enters USR

Scene two ends with Robert leaving through audience. Jerry remains seated, flat is constructed around him. Undrape the sofa, move table CS. Emma enters US wearing outdoor clothes and sits in other chair.

The other woman brings on an overcoat for him, and announces ‘Two years earlier’. Scene three begins.

Scene four begins with Robert entering from audience with a drink for Jerry, gives it to him. They are standing up throughout. Emma enters US and after initial sparring with Robert, goes to get a drink.

Simon – better to not wear street clothes in rehearsal, as will change how stand etc. Cast to try and come in slightly different clothes, not costume, but not as themselves. Emmas like the idea of a dress in the last scene.

Simon – Well done on lines to everyone.

Aggi – as prompt, how much input do cast want on exact liness?

John A – wants pauses and silences indicated but not exact lines at this stage. Will indicate when they want correction on exact lines.